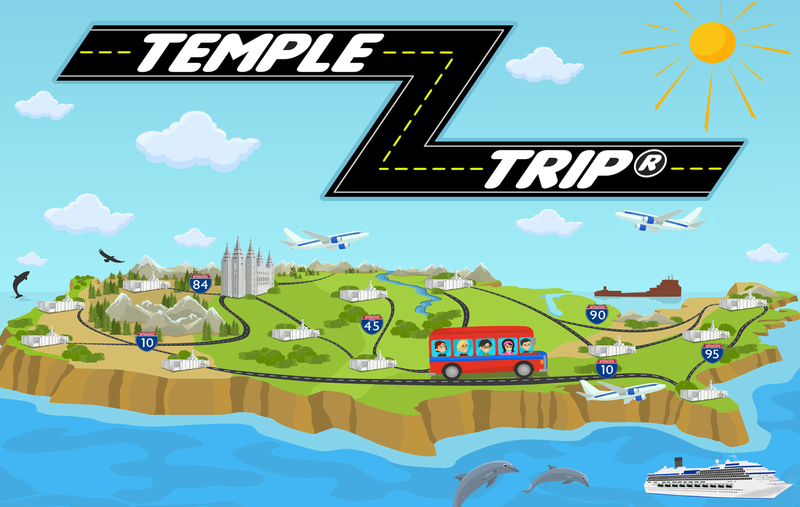 TEMPLE TRIP® is a fast fun-filled family game for up to ten players, and for ages as young as eight, lasting about forty-five minutes for four players.  The object of the game is to race around the board trying to visit six LDS temples in different cities, while trying to block your opponents travel plans at the same time.

Every player starts the game with one red roadworks cube and one black air turbulence cube.  Before the first dice is thrown everyone has the chance to try and guess a route their opponents might take, and then use their cubes to block one air route and one road, just take care not to block your own travel routes.  When players reach a temple on their itinerary, they are rewarded with another cone to immediately place to try and stop an opponent.

Players are free to choose their travel mode, it can be either a flight or a road trip, as they follow their itinerary to visit the various temples scattered across North America.  Players can easily switch travel modes at any time, as needed, just remember that all flights must start and finish at an airport.

Every time a player makes a change from a road trip to a flight at an airport, or vice versa, or every time a player crosses the border from the US into Canada or Mexico, that player must draw an ASSIGNMENT Card.  As players travel from city to city, by road or air, they will also have the option to draw an ASSIGNMENT Card.  This means there are numerous opportunities for any of the forty five ASSIGNMENT Cards to be played, and some are guaranteed to easily disrupt even the best laid travel plans.

Many of these ASSIGNMENT Cards are diversions, it could be for a single player, or perhaps for a select group, and then sometimes it's for everyone.  Some cards must be played immediately, while others can be saved for future use.  Some cards allow the drawing player to assign the diversion, whilst other cards give that decision to an opponent. Some could as easily be to your advantage, or disadvantage, depending on each individual itinerary.

No two games are ever the same, because of the number of temples to visit, the constantly changing itineraries, the diverse scenarios offered by the ASSIGNMENT Cards, and finally the random selection by the players as they utilize their cones trying to block each other.